MABEL is currently unavailable due to a technical issue.  This message will be removed when the problem has been fixed.  Sorry for any inconvenience. 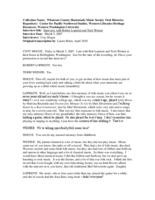 Rob Lopresti and Terri Weiner oral history
Mr. Lopresti and Ms. Weiner both discuss their early musical memories, including familial influences and popular music influences, including 1960s folk staple, Joan Baez. Both were born on the east coast, Lopresti in New Jersey in 1954, and Weiner in New York in 1956. Both also found their initial interest in folk music during high school, and discuss the reasons that they were drawn to folk music. They relate the difference in the way music was experienced on the east coast in the 1960s and 1970s compared to the west coast, the accessibility of the music scene and the musicians in the Northwest that was not true for them on the east coast. They re-located to Bellingham in 1987. They discuss their first experiences with the concerts at the Roeder House and the WCHMS. Relate their musical experiences in Bellingham, including seeing such acts as Richard Scholtz, Ani diFranco, and Bob Franke. They also discuss their experiences with the monthly concert series put on by the Homemade Music Society and put on at the Roeder House.